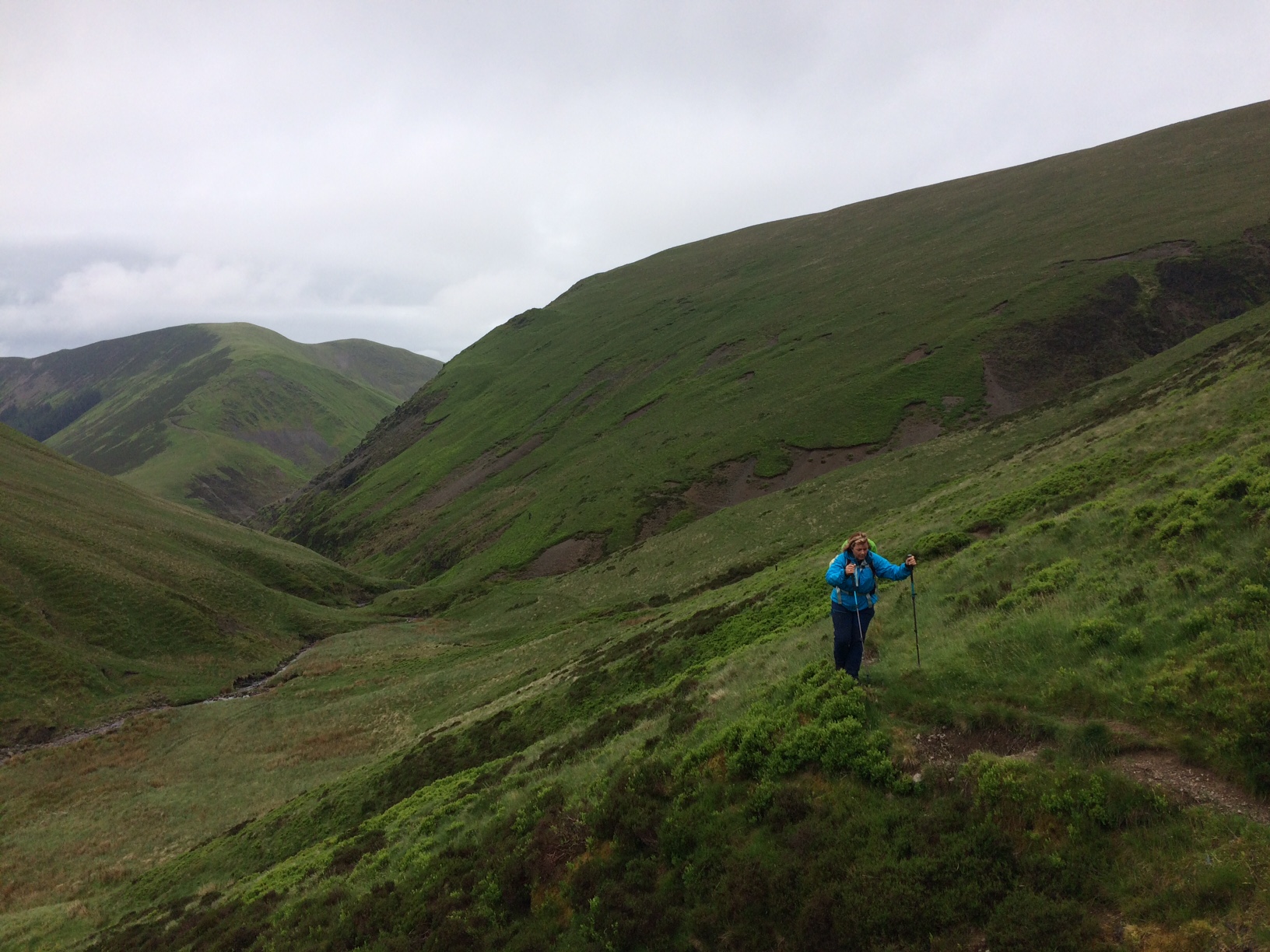 Today was the rainy day, the kind of rain that gets you wet, not the other stuff you may have heard about, this was ‘proper’ Scottish rain.
Leaving Beattock and trying to cross the busy A74(M) was probably the biggest challenge of the day a combination of bad signage and impatience to crack on meant we may have used an ‘alternative’ route.
Having followed ‘Moffat Water’ for a short while, soon we were back into Forestry lands. We followed the Forestry road through the trees, using an optional route today, the ‘Low Level’ route, mainly because of the driving rain (had it been sunny maybe I’d have convinced Adele the high level route would be worth it).
The highlight of the day today was definitely walking on the high paths around ‘Ettrick Head’ (coincidentally where we found our 7th hidden coin) the views back down the valley we walked up were stunning… Adele would probably argue our visit to ‘Over Phawhope’ bothy, a little later, where we ate our lunch was my highlight as there’s a log burner there.
After that there was about 6 miles of road walking to our pickup point today. We’d be staying at the, highly recommended, Tushielaw Inn. We’re already thinking about our next stay here Xx
Stats: Total Mileage: 144.3 Pint count: 22 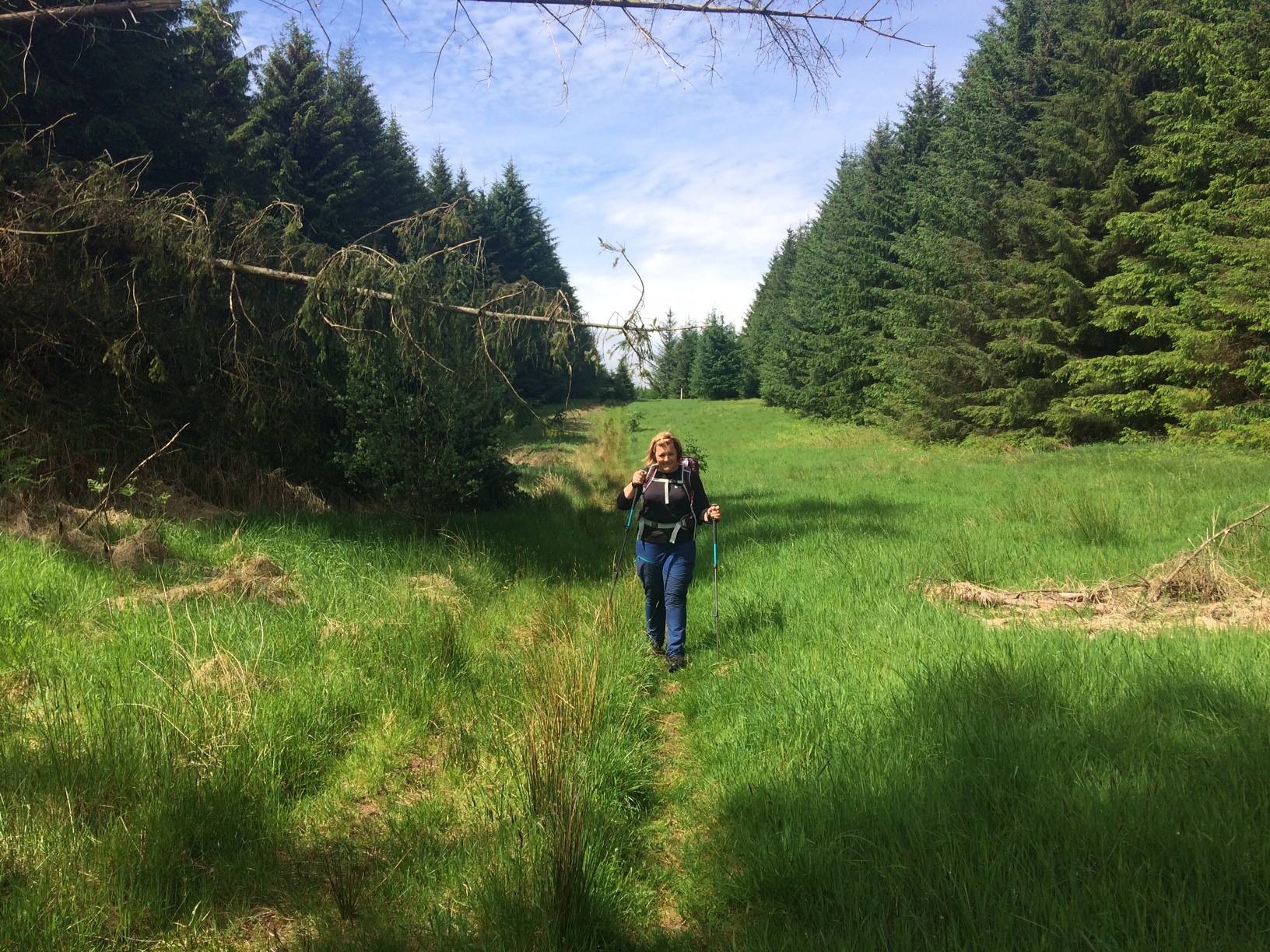 From our bedroom window the day looked like it would be very foggy, low cloud and no likelihood of any sunshine at all.
However, as we were driven back to the drop off point @ Overfingland (exactly where we’d been picked up last night) the clouds began to lift and blue sky was definitely evident.
I’d promised Adele there wouldn’t be as many steep hills today as there was yesterday, I think she fancied an easier ‘transitional’ day before the Ettrick Hills kick in tomorrow. Today would be mostly wandering through the firebreaks in the plantations by the babbling burns and the odd still pond. Fallen trees across the trail were also a feature again today, as they had been on previous day, but this time instead of them being ‘cut back’ by someone wielding a chainsaw, we had to circumnavigate the ‘high branch’ ends of the trees. (The root end always has a smelly pool of stagnant water to negotiate)
The highlight of the day was almost certainly ‘Daer Reservoir’, an expanse of water reputedly able to sate the needs of half the population of Lanarkshire. Hmmm.
At about 1pm we were descending through the forest, the temperature was beginning to sore again, full sunshine and blue sky was dominant, so we stopped for a lunch break. From here the track was very similar to the many Forestry tracks we’d encountered before so the surroundings felt quite familiar…
T’was just a short walk down the final road to a pint in the beer garden & our bed for the night at ‘The Old Stables Inn’
Stats: Total Mileage: 127.5 Pint count: 19 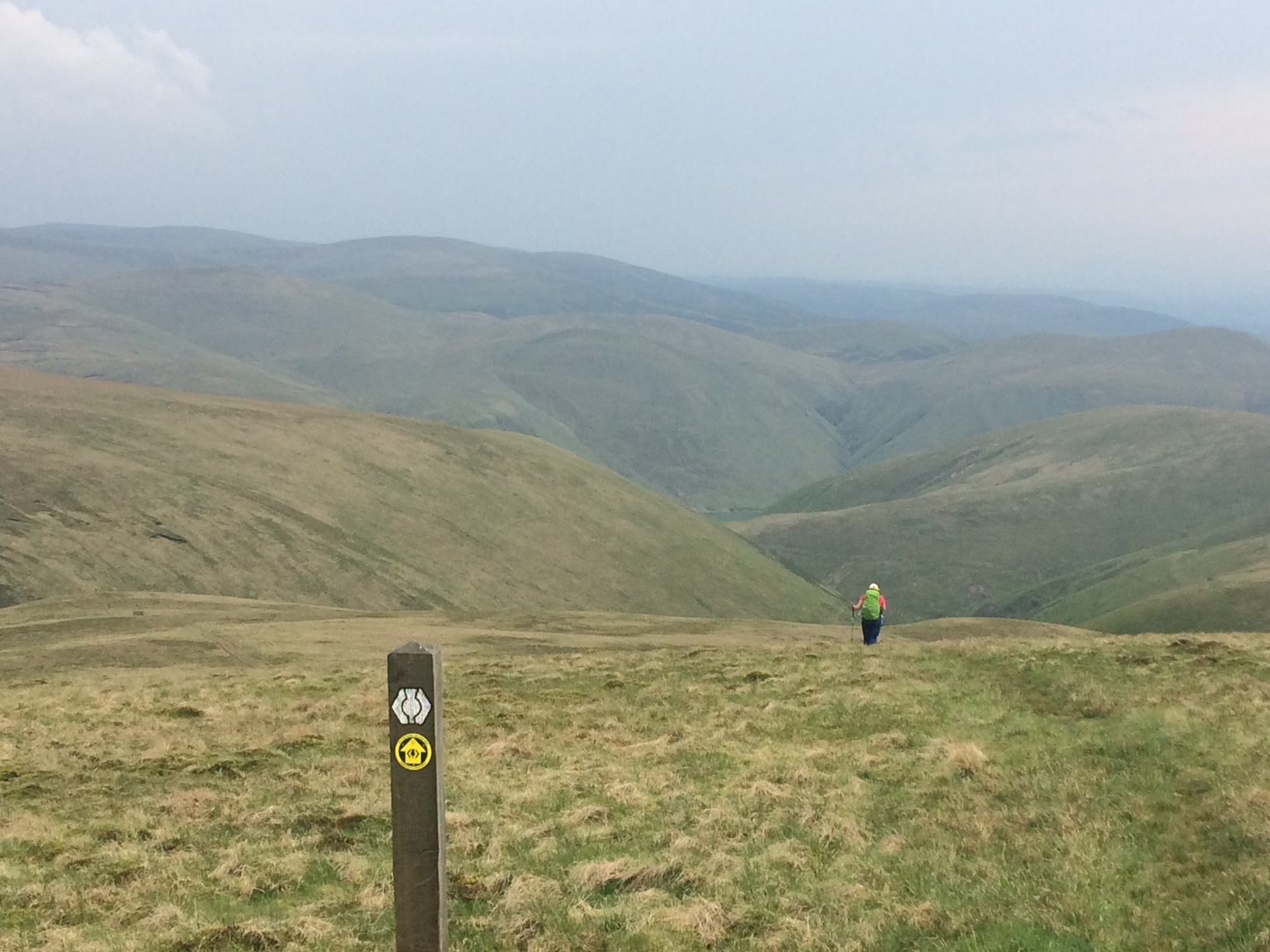 We left ‘Euchanfoot B&B’ after a very pleasant stay (probably the best accommodation on the trek so far!)… we still had 1.5 miles of yesterday’s walk into Sanquhar proper to go…
All routes out of Sanquhar are slightly uphill, which was good because the view back when you stopped for a quick breather was well worth it. We kept climbing through the ‘Conrig Hill pass’ and then down to ‘Cogshead’ where we found our first hidden treasure of the day.
Our lunchtime destination today would be Wanlockhead (425m, reputedly Britain’s highest village?), to get there we just had a traverse ‘Glengaber Hill’. We stopped for lunch at the Wanlockhead Inn (Scotland’s highest pub)….
After lunch, the high point of the whole walk (725m), the long ascent of Lowther Hill complete with teed up ‘golf ball’ (Radar station; home to “National Air Traffic Services” NATS), and crash site of a Hawker Hurricane 1941.
Now we just had to get down from this lofty perch, “Easier said than done I hear you say”. Quite right, now I expected to go up slightly and down Cold Moss & Comb Head on the way but, oversight on my part, the wee ‘Laght Hill’ (507m) was missed during map reading so was an unexpected hindrance to our plan to reach today’s point up point at 17:30…. making us 20mins late 🙁 However, I did manage to find treasure in Kist No.7 in all the commotion. But, upon arrival at the pickup point, didn’t manage to register a tracking beacon.
Stats: Total Mileage: 111.9 Pint count: 15 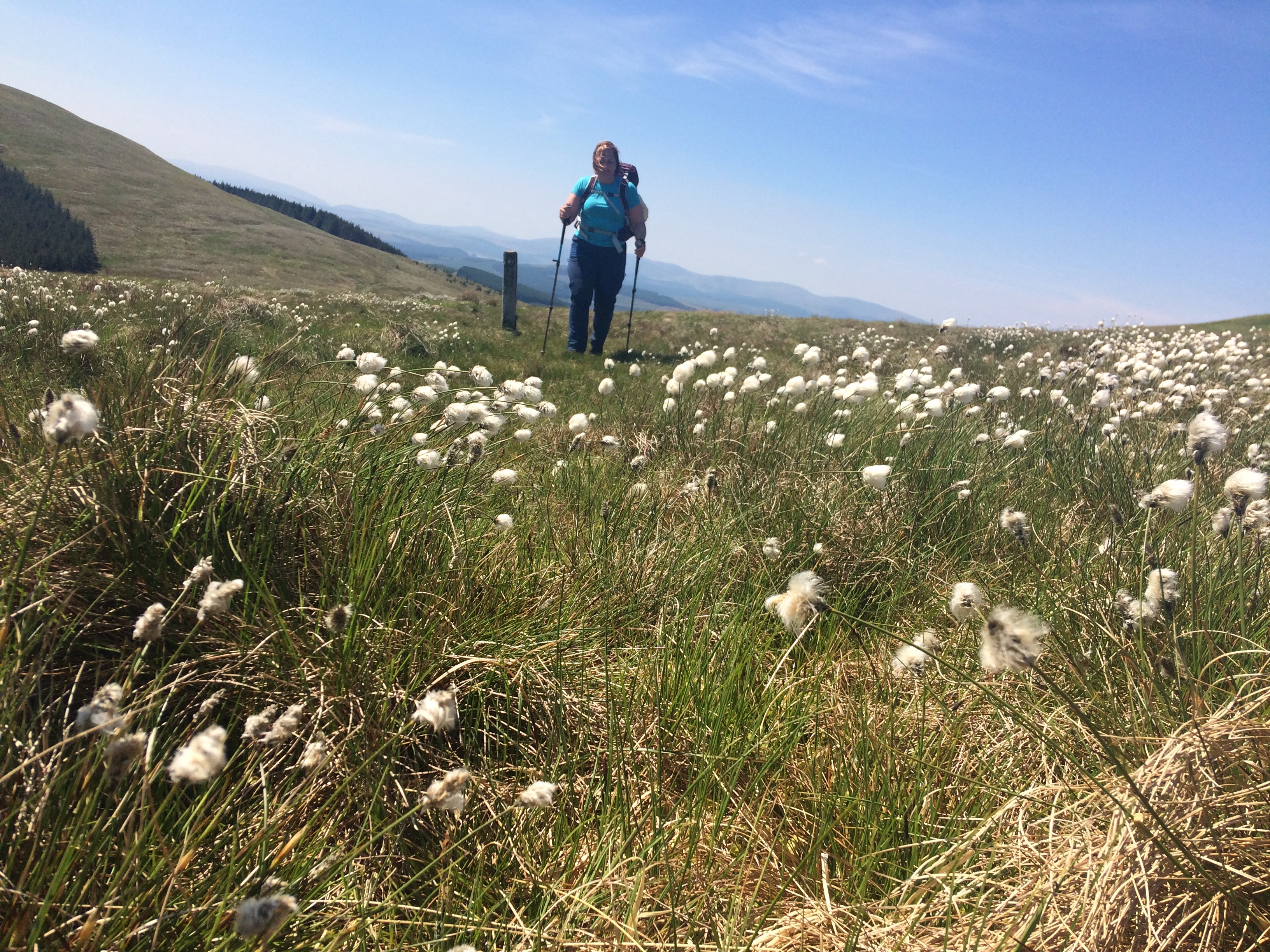 Firstly apologies for not managing to send many tracking beacons today, there wasn’t much signal available on our trek. (Our guidebook says “some of the remotest country in eastern Galloway)
Today our walk was a long & strenuous one. During the morning we had to tackle a couple of climbs. Firstly, ‘Manquhill Hill’ (421m) (pronounced “Manwill”) then the big one ‘Benbrack’ (580m), the highest point since Portpatrick, now in the grand scheme of things that’s not massive… but when you’re carrying all your kit for 2 weeks it’s a significant obstacle. However, greeting us at the top was not only a trig point, but a huge stone arch. The significance of this arch we don’t know, some kind of sculpture ‘thing’.
Next, after we’d descended to ‘plantation level’ was ‘Allan’s Cairn’ commemorating martyrs shot by dragoons in the 1600’s (Some religious wranglings after Charlie [son of Charlie] took the throne)
After we’d paid a flying visit to ‘Polskeoch Bothy’ we had a road section to contend with. Now today was a hot day, but up in the hills we’d had a mistral wind to keep us cool, down on the road it was hot, hot, hot the heat reflecting off the tarmac as we strode eastwards.
At about 4 o’clock we came across a dwelling selling refreshment to weary walkers. After ordering coffee we took the opportunity to have a few water bottles filled as we still had about 6.6 miles to go :-/
Last up was the long climb up and over ‘Cloud Hill’ (451m), where we found today’s hidden treasure, we caught our first glimpse of Sanquhar with 4 miles to go, eventually reaching the B&B at exactly 18:30
Stats: Total mileage: 97.4 Pint count: 11 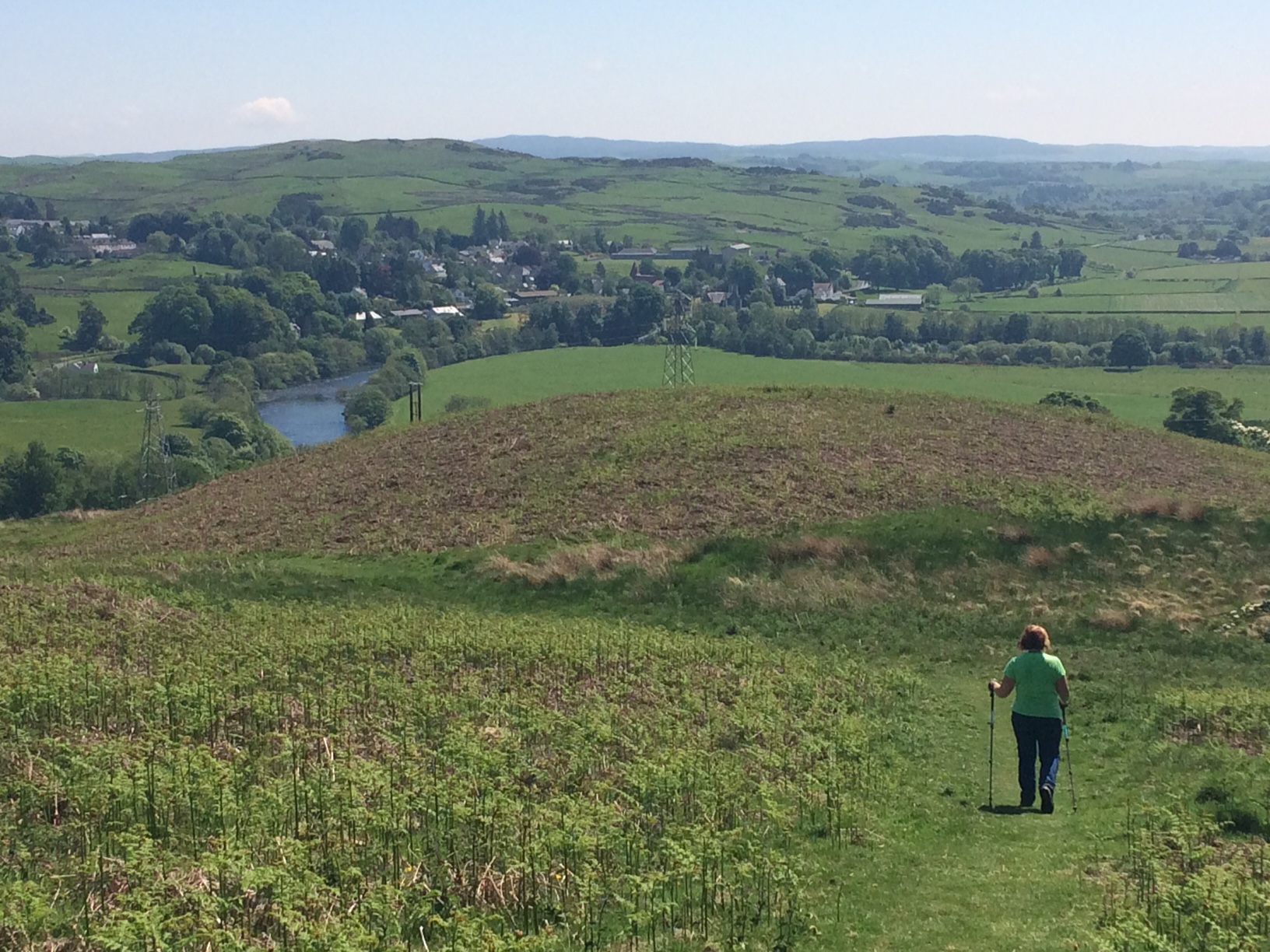 After being dropped off at exactly the same place as we’d been picked up. Our day started very gloomily; low cloud, mist & not a breath of wind. Think ‘The Day’ (post apocalyptic film circa 2011)
With it being so still & grey the midges were out in force, my advice to Adele, “keep moving, they don’t bother you so much if you’re not standing still”, shortly we turned right off the road and onto a boggy forestry track, the long grasses still damp with morning dew (midge heaven)
Our quest for treasure today would be deep in the pine trees, we didn’t find anything on first inspection of the marked area, so we had another look around. In fact we spent well over an hour searching… to no avail. Kist4 not found “Epic Fail”
As we ventured on the cloud began to lift and the skies brightened, blue sky was beginning to show through, after a fair bit of road walking we were nearly back at ‘Dalry’ (where we’re staying these 2 nights). We planned a pub lunch today, instead of the now usual packed lunches knowing ‘Dalry’ was about halfway. ‘The Clachan Inn’ was a welcome oasis with the temperature rising we managed a couple of pints during our ‘lunch hour’
The afternoon saw perfect conditions for walking; bright warm sunshine, clear blue skies, a cooling southeasterly breeze & soft grassy pasture land on wide open rolling countryside. With the temperatures still rising and the incline on Culmark Hill doing the same I could see Adele was beginning to struggle, but with the ‘pick-up point’ just a couple of miles away we managed to arrive just as the car pulled up to end another fantastic day on the trail.
Stats: Total mileage: 79.3 Pint count: 11